Find of the Knight Part1 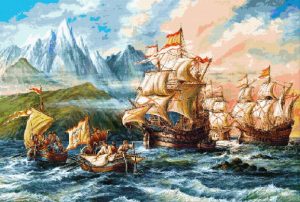 There was once a ship of pirates that had caught a courageous knight (Charms). After a week later there was a devastating flood when the Earth shook and it wiped everything out of its way. The pirates tried everything but suddenly the water formed a huge hole in the ship and it went straight hitting the pirates. FLOOSH! The pirates died but somehow Charms swam to a magical island…

After Charms took a sigh of breath, BOOM! There was a sudden crash of the ship and came out The Defenders of the Universe! Charms asked “what are you doing here?” The team introduced themselves as the Defenders of the Universe, “Our names are: Gromstone, Transi, Icewing, Waterwing, Freaky, and Laserboy.” The both parties said good bye to each other and continued on their journey.

The Defenders narrated their story, “we are a team and our greatest enemy are The Destroyers (a robotic army). We became enemies since aliens controlled robots and one mechanic made a robot called Destruction and it built an army of robots that took over the world. Since then we are fighting.”

Then Charms narrated his story, “there was an army that invaded our kingdom and launched fireballs. Our kingdom was on fire and the king was fighting while he was targeted by a person who launched an arrow. It led to his death, hence everybody became hopeless except me. I fought until my army was sacrificed. When I thought no one was looking, I grabbed my horse and sneaked away. Soon I stopped to drink water on the sea shore and all of a sudden a pirate came and grabbed me by the arm.”

With Charm’s help the defenders defeated every enemy except one, The Destroyers. Meanwhile back on Earth Edmos’s cursed team was waiting for Charm on the same island…

(to be continued in next Publication)

I am Chaitanya Bhargava and my age is 8 years. I am from Gurgaon. I like play Football and Cricket as outdoor games and WII as an indoor game. My favourite book series is Geronimo Stilton.