Why owls fly at night

Once upon a time, Owls were just like other birds, soaring high in the sky during the day. But why don’t they fly around at daytime anymore? Why do they fly at night? Here’s why…

There used to be an owl called Aandhai, and he was very arrogant and selfish. He was a big bully, and everyone was scared of him. 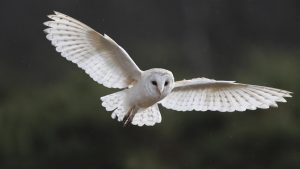 One day, Aandhai saw a little Hummingbird playing on the swings at the park. But Aandhai wanted to play on the swings too. He didn’t ask the bird if he could have a turn on the swings—he was too arrogant for that! So, all he did was push the little bird down and get on the swing himself!

At the same moment, God of the Sun “Surya” was watching over the park, and when he saw what Aandhai did, he became furious! He thought all the animals were kind to each other. I will tell my wife,” he thought to himself, “she’ll know what to do!” So when he went back home that night, he told his wife the Moon Goddess Nila, what he saw that morning. “But I don’t know what type of punishment would fit his mistake,” he continued “Will you please help me?”

“Of course, I will help you,” she replied kindly. However I have to go to work.

After work when Nila returned, she seemed very sad. When Surya asked her if anything had happened while she was working, she explained that while she was spending her time lighting up the night sky, she felt very lonely and depressed. “Nobody even comes out!” she protested “It feels like a terrible waste of time!”.

Then Surya had a great idea. “We could make Aandhai sleep during the day and roam around during the night. We can solve two problems at once!” Surya suggested after a lot of thought.

Nila said “But yesterday was the first time you saw him behaving badly, so give him a chance you can never be sure! Surya considered to observe his behavior the next day. But if I see him doing anything wrong, he will definitely be punished…

The next day, Surya came out and saw a group of little Bluebirds playing on a trampoline. They were having a great time, until Aandhai came. He jumped on the trampoline, and was heavier than the other birds, all the little birds bounced off in one jump, Surya was outraged!

Surya glided down to the Earth. He appeared in front of Aandhai and cast a spell on him. Then he disappeared. Aandhai looked up into the sky but he could no longer bear the sunlight. He went back home, sealing his eyes shut to hide from the sun. Since then, Aandhai and the other Owls only came out at night! And that is why Owls fly at night.

Sadhana Saravanan
Year 7, YCIS
I am Sadhana, and I am 11 years old. I am from Chennai. My family and I have been living in Shanghai for the past 8 years. My hobbies are reading, drawing and swimming.