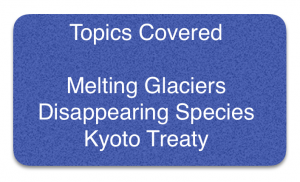 What is Global warming?

The ozone layer is about 10 miles above Earth. This layer is basically a cap for our planet. It protects the Earth from harmful ultraviolet radiation, also known as UV rays. We’ve used a lot of CFCs, short for Chlorofluorocarbons. Global warming is the change of the temperature in the atmosphere.

As the Earth is warming, a few problems follow. The biggest problem includes lack of water. As the Earth is heating, glaciers are melting. This also means that the alternative source of using water will also have to come to an end. 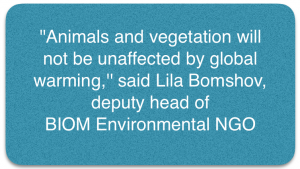 The second largest problem is extinction. Animals who need cold temperatures such as the Adelie penguin, Polar bear, Quiver tree, and coral worldwide are in danger. This change disturbs the food chain and the food web. As the Earth is warming up, these animals are in great danger. Natural disasters such as floods, tornadoes, and droughts will be frequent.

The coastal cities such as New York and Los Angeles will be underwater, some scientists predict. The tiny island of Tuvalu in the South Pacific is only about 15ft above sea level. As global warming continues, some people fear it will be the first country to be drowned(Salon.com). By the next century, long-lasting floods will happen from the coast of Maine to Texas along the western part of United States(nationalgeographic.com).

This picture shows how glaciers have melted in the past years. The change is huge. We have to do something about this problem. The animals which live here are probably finding a new home due to their melting habitat. 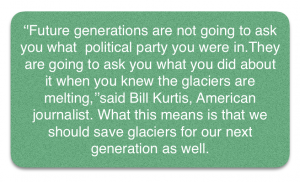 At the poles, glaciers are melting. This has a lot of negative effects on animals. One of the greatest dangers is extinction(Earth partners, Yvonne Morrison). Animals who need cold weather will become extinct. Kyrgyzstan, the most diverse place in Central Asia, has species which are endangered, and very little action is taken(alijazeera.com). You might think that an animal doesn’t matter to you, but actually, they do. Unknowingly, we rely on biodiversity every day. You need protein in your body to do all the actions you do. Now without meat, where will you get all of your protein from(webnd.com)? We need animals for other things as well, such as clothing, shelter, medicine, and oxygen. Without animals, humans would be wiped out in a century(quara.com). By the next century, long lasting floods will happen from the coast of Maine to Texas along the west part of United States. (nationalgeographic.com) 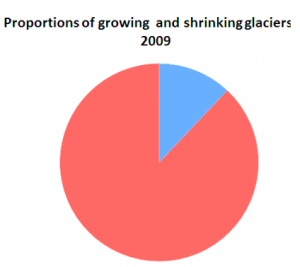 ”Half of all species on Earth could disappear by the end of the century because of our collective impact,” said National Geographic’s photographer, Louie Psihoyos.

Due to global warming, certain species such as Plankton and polar bears are threatened. We must help save these animals. Here is a list of animals who are affected by global warming. The polar bears have lost weight and have a hard time making internal heat. Fish species are migrating, causing their predators to starve. Over the past decade, the planets average temperature has increased by 1 degree Fahrenheit. Scientist found this out because of the greenhouse gases and carbon dioxide from human activities(Earth partners, Yvonne Morrison). 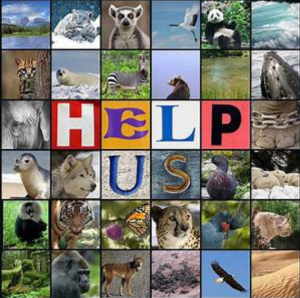 This picture shows the most recent animals which have gone extinct. We can’t help these animals anymore, but we can help the animals which are endangered right now. 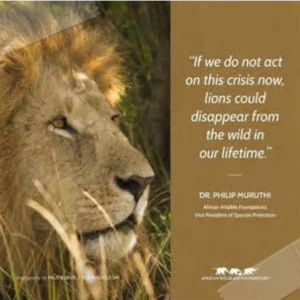 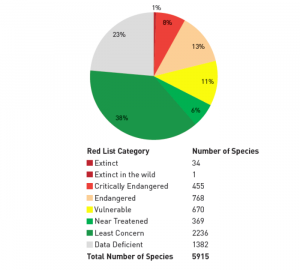 This graphic shows the number of critically endangered animals and the animals which are extinct.

”The U.S withdrawal from the Kyoto Protocol endangers the entire process,”said French Socialist politician, Lauret Fabius. Lauret means that one of the biggest country which contribute to global warming is U.S, and without them signing the treaty, the Earth is still in big danger.

The Kyoto Treaty was born on December 1997, at Kyoto, Japan. Scientist worldwide planned the steps that need to be taken to reduce the greenhouse gases in the world. They say this can cause the Earth to heat a lot. In 1997, people went to Kyoto, Japan to make an agreement called the Kyoto Treaty. This treaty set some goals and rules countries should follow for a better environment. In 2005, the Kyoto Treaty was legal. More than 160 countries are involved in this NGO today(Earthpartners, Yvonne Morrison). (An NGO is a non-government organization, or like a charity house) 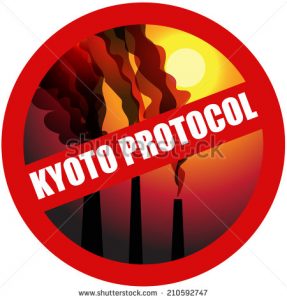 Our first step towards stoping Global warming was the Kyoto Treaty or Kyoto Protocol. 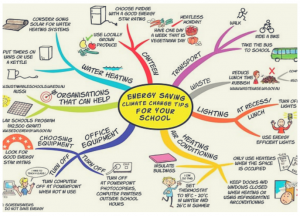 This graphic shows the ways we can save energy at home and school. We should use these tips, save energy and try to make the world a better place. 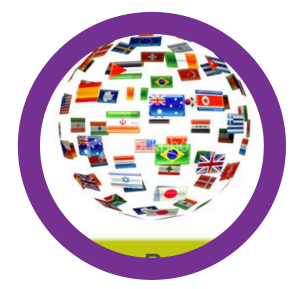 This world globe shows us how many countries signed the Kyoto Protocol. 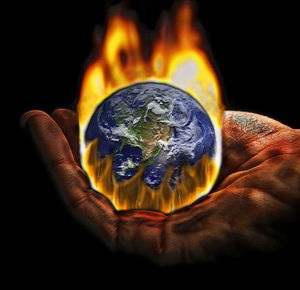 Please help save Earth! Doing a little bit of extra work will help a lot in the future!

Dhwani Mehta is 10 years old, and she studies in Shanghai High School International Division in grade 5.

She is the President of the Associated Student Body (ASB) at her school. She has won numerous awards for her Science Fair Projects, Story telling, Cartoon Competition, Dance performances and Animation skills.