We finally landed on Europa, one of Jupiter’s largest moons. My crew and I came to Europa to search and explore to answer one of NASA’s burning questions; is there life on Europa?, and is it fit for human life? It was our first day and we weren’t ready to use our equipment to drill a hole into the ice of Europa. It would take at least a week for our engineers to put together all the parts of the machine. Meanwhile some of my crew members will join me in taking samples of the ice and taking pictures of anything that looks peculiar.

The temperature on Europa is below -160 Celsius. The ice is impossible to break with bare hands so we used small knives to help us get a small sample. It was our second day on Europa and it already seemed like there won’t be life in the water underneath the ice, the opposite of what NASA expected. It felt like the surface was isolated, with only us walking around and the winds blowing the snow away. Europa doesn’t rotate when it orbits Jupiter, we are lucky that we landed on the face where Jupiter is visible. We could also see many stars and other moons of Jupiter occasionally. It was our third day on Europa and things started to get more interesting. Some of my crew members were discovering holes in the ice. We wondered what could be the cause? The ice of Europa is supposed to be kilo meters thick. Whatever was making these holes, must be very strong. We took samples from the holes hoping that there would be traces of DNA.

After we did all of our tests on the samples of ice we found near the holes, we were amazed to find that there were minor traces of DNA. It was our fourth day on Europa and were are going to start drilling tomorrow. We hoped that there was something under that ice. If there wasn’t, then all of this was for nothing. 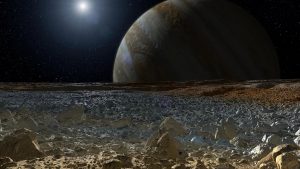 Our fifth day on Europa, the day we journeyed down the big hole we drilled. The machines were put together looked like alien engineering. They had long chainsaws and big levers. I wondered how our engineers designed these things. The noise was unbearable even in the space suits! It took us about half an hour to dig out the big block of ice. I began thinking that the ice wasn’t that deep. 3 other crew members and I were lowered down in a small metal box that looked like an elevator. It took us about an hour to finally get to the water below. We turned on the big torch. We saw nothing but water at first. 10 minutes went by, nothing. 20 minutes went by and nothing. Then 30 minutes 40, 50…….and then something large hit the edge of the ice hole. We were lucky enough to catch a glimpse of the creature. We were amazed, astonished and a whole school of tiny looking creatures swam by. Everything we saw was filmed. Creatures with long bodies, giant eyes, some even with long tusks! It was like our childhood imaginations came alive. Creatures that looked like they came alive from a child’s dream! The question was, how are we going to study them?

The small ones were easy to capture in the small capsule. We had to drill more holes for us to study the big ones. We had so many questions! What do they eat? How do their bodies work? How does their habitat look like. Soon enough we’ll be back with more equipment for us to swim in the hidden water wonderland of Europa. This means humans could live underwater with oxygen filled rooms. Now there was a whole new world of science to explore!

I am Venkata Sai Charmi Koona (Charmi), studying in grade 7 in Shanghai United International School.(SUIS). I am from the state of Andhra Pradesh in India and have been living in China for past 10 years. I hope you enjoy my short story.